Coming to grips with Wired's pick of the litter

Always on the hunt for the perfect combination of equipment to live and work with, I recently got a Panasonic GF1 thinking it would the perfect little commuter camera to accompany me on the train and other domestic adventures.
After shooting with both the 20mm f/1.7 and 14mm-45mm zoom lenses, I started questioning my choice.  Fitted with a lens, the finder, neck strap and shade, while it was considerable lighter that a 5DmkII, the form factor was remarkably large.  Vowing to be less Sherpa-like, I switched from my backpack to a small commuter bag, so size is important.
While the images the GF1 made were good, I have to say, I was expecting more. For the high cost and larger then expected size of the system, the GF1 made it’s way to eBay as I replaced it with it's little brother, the Lumix LX5.  Loving both German lenses (my license plates are Zeiss 1, after all) and wide-angle lenses, the 24mm f/2 Leica lens sure looked hard to beat.
After shooting with the camera for a couple days, I am ecstatic with my decision, the lens is hard to beat and the smaller, pocketable size makes all the difference in the world.  It is clearly the logical bridge between the iPhone and the mkII. 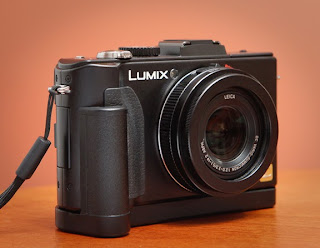 The only improvement I was looking for was a more robust grip than the camera provided.  The current Leica version of the LX5, the D-LUX 5 and the earlier D-LUX 4 both have accessory grips available that would solve this.  A quick trip to world famous Leica dealer, Central Camera to talk to Dan and Mani, proved the D-LUX grip would be perfect...
EXCEPT...
the D-LUX 4 has a completely flat front and Panasonic added a moulded grip that looked freakishly similar to one of the fantastic products made by Richard Franiec.
Looking at the Leica grip (model #18697) it looked like soft aluminum that could be milled down to fit over the handgrip.  I'm game...out came the plastic and a minute later I was the owner of a shiny new D-LUX 4 grip.

After the wife and kids were tucked away in bed, I headed into the basement and constructed a mount to hold the grip properly in the mill and fired it up.  Less then a minute later I slammed on the brakes because I realized the grip is actually made of plastic.  Bummer, but now, easy peasy... plug in the Dremel and get to work.  About an hour later I had removed enough of the upright that the grip will mount to the camera perfectly.  Even the centering pin on the bottom of the grip lines up perfectly to the bottom of the camera.
So out goes this call to all large handed owners of Wired Magazine's camera of the year: if you own a Dremel (and are comfortable dicing up some perfectly good Leica products) then rejoice and enjoy the added ergonomics you find with this modification.
Dirk

Posted by Dirk Fletcher at 9:19 PM