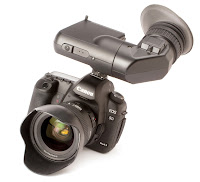 Late in October 2008 I got an email to come to ProGear to check out the new 5D mkII live and in person.  Without a doubt it would be an hit, I don't think anybody knew at the time (well maybe Vincent Laforet did) just what a complete game changer this single camera would turn out to be.
I truly feel as if Canon thought it would be a nice feature to capture the video already generated from the live view LCD that made its first prosumer appearance in the 40D, I don't think they anticipated just how this one little feature would change the face of commercial photography as we know it.
By I digress... I went home after playing with the camera that night wondering how to adapt a professional video finder to this new and magical machine that was on its way to capturing the attention of the industry.

After digging around and reading everything I could find, I settled on a JVC VFP115bu finder, a 1.5 inch b/w CRT which would, by nature of a CRT, deliver a sharper image and give the user the ability to see deep into the shadows far better then a similar sized and priced LCD finder.  After tinkering a bit (and blowing one up in the process) I had the finder mounted to the camera and working wonderfully.
It wasn't until I interviewed photographer Dirck Halstead for a film I was making that I realized the potential commercial appeal of the finder.  Halstead featured my finder on his heavily trafficked Digital Journalist website and I received a surprising amount of inquires from individuals interested in purchasing one.  Working with a local machine shop, I mass-produced a new bracket that laid the finder flat on top of the camera giving a more comfortable balance and greater usability.
This new version of the finder is described in detail on my website and was video reviewed by photographer and Canon Explorer of Light, Bruce Dorn on his IDC website, (check out the review here).  While he generally liked the finder, he did give some incorrect information during his review, noting the finder was the source of the 'Jello-O effect’, which is actually the rolling shutter effect, that is caused by the digital shutter of the camera.  This phenomenon has been widely discussed in the media.
I have both sold these and helped others build them for a little while but recently JVC and just about everyone, has stopped production on anything using a CRT.  With a ton of these industrial finders floating around, you should be able to find one and get it atop your camera with this as a guide.
So if you want to build one, here is the lowdown.  Know that any technically savvy individual should be able to produce one with a bit of work and maybe a wee bit of head scratching.  You do need to make a couple of intricate solders so you may want to enlist the help of a geeky friend if you are personally not technically and/or mechanically proficient.


PLEASE READ THIS: Please note, you are officially working on your own, while I am showing you what I did to make this possible I am in no way supporting, recommending or responsible for any gear that you modify.  Again, I am only showing you what I did…K?
Pulling the plug: This is a scariest part of the entire operation (maybe the second most frightening part...stay tuned) you need to cut off the plug off as close to the connector as possible and separate the wires coming out.


Cut all the way through to remove the plug. Once the large plug is removed you are going to need to remove the outer shielding on the wire about an inch or so to expose all seven wires inside.  You will find some string as well that keeps the cable full, these can be trimmed away.  You only need three (four kinda) wires from inside, the brown and yellow are the power wires (the brown wire is +12 and the yellow is -12) the blue, green, red and black are all unused and can be trimmed short and taped off.
Rewiring: Once you get the power wires identified and stripped back, there is a larger grey cable is actually a very small coax cable, this is what is going to carry the composite signal from your camera body to the finder.  You will need to strip the outside shielding to get access to the outer wire which will eventually connect with the outside of the RCA cable coming from the 5DMKII.  The center wire also needs to be stripped and eventually needs to make contact with the center post of the RCA coming from the camera.
Powering it up:  Keep in mind the finder is 'dumb' (this was a JVC tech's description, not mine!) there is no switch or any means to turn it on or off.  Once you hit it with 12 volts, it powers up... that easy.  Which also can be problematic if you forget to pull the battery before going to lunch or worse, finish for the day.  Depending on what kind of battery you are using (and how long you get for lunch) you can get anywhere from 1 to 8 hours of use before needing to recharge.  Only needing a simple 12 volts, you can easily use anything from a car cigarette lighter, lead acid battery even an affordable wall adapter if you aren't using professional 12 volt batteries.  I even made an 8 AA battery holder as an emergency pack should I need it. In almost three years of using the finder I've yet to need it but it is there if I do.
I found a simple and easy to find 12 volt, 5Ah lead acid battery to be the best solution for my needs.  The battery in the Dorn review was a smaller battery that I stopped using as it only held about a 90-minute charge.  The larger 5 amp hour block style battery fits perfectly into a Temba pouch for a digital back and holds a charge well over 5 hours.
If you don't want to have professional cables made you can use just about any cable capable of carrying a decent amount of current through it.  If you don't have anything around and a coiled cable is not important to you, a dual 12 gauge cable with an outer piece of insulation should work well but my preference is a cable from a Quantum or other high voltage flash system.
Plugs are your choice, anything from a trailer adapter to a decent power plug will work but remember the power cables are thick so a larger adapter will be easier to solder in place.
Signal: The small coaxial cable that you carefully stripped back is what you need to use to get the signal from the camera into the finder.  I used a female RCA cable so the cable that was supplied with the Canon 5D would plug straight in without needing any other adapters.  You need to insure you get a good clean solder as I would hate to see what would happen should this get shorted.  I would have to assume the camera just won a round trip to the Canon repair facility in New Jersey and no it will not be an all expenses paid trip.  Please be CAREFUL.
On the thought of making connections, I firmly recommend using shrink tube on all your connections.  You slip if over before you make your solder then slide it in place and hit it with a heat gun and it will shrink in place around your solder joint.  Tubing is easily available on the internet or Radio Shack or any electronics supply house.
Mounting the finder: Now that you have a female RCA cable attached to the co axle cable and the power cables attached to 12 volts you need to get it mounted to the camera.  Figure 6 shows my original handmade bracket that was simply extruded aluminum from the hardware store that was bent at a 90 degree angle with a second piece filed into a dove tail that allowed the finder to slide over it and lock it down.  Behind that is the professional made bracket with its aluminum accessory shoe with a ¼ 20 mount on the bottom so you could mount the finder to a bracket if you didn’t want to mount it on the finder.
I have several of these available for purchase if you are interested, just drop me a line.
Any level of creativity should be able to get this on your camera or a suitable bracket of your own creation-be creative!  My initial design, which you can see in the Digital Journalist article had the finder at a 90 degree angle which worked, just not as good as the current setup.
Thanks for reading and let me know if you have any questions!
Dirk
Posted by Dirk Fletcher at 12:59 AM