Lightweight 4x5 that shares a lens with 6x12 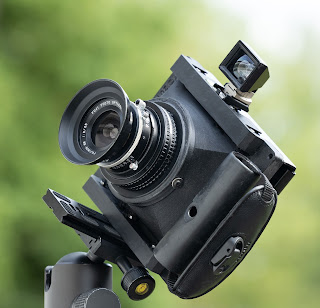 I’ve build several 65mm wide cameras over the years, the first was a super solid shooter, built on a Cambo passport camera that is quite similar to the original Cambo wide camera. My next 65mm camera used a rotating back and the same (heavy) first generation Schneider helical. The most recent camera used the super cool ultralight Harmon 4x5 pinhole camera which was designed and built by large format composite camera builder extraordinaire Mike Walker of Walker Cameras. 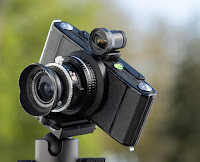 After finally putting the finishing touches on a lightweight 65mm 6x12 travel camera a couple weeks ago, I realized I could spin off the light weight eBay helical and use the same lens and focusing mount combo on another camera... Even though I have been wanting to wind down the midnight cutting, grinding and building sessions, I thought this could be too cool of a project not to pursue.

Having a lightweight 6x12 pano AND 4x5 point-and-shoot that share a lens and focus mount might be the perfect little travel camera combination for an ADD film shooter who was always thinking about changing things up.

Before getting into the camera mods, I need to add a little disclaimer. I’m usually not a huge fan of 3D printed cameras. Having shot with a Linhof Super Technika III for so many years, I just love the rock solid build and precise feel of the movements and German engineering. As much creativity and flexibility (and accessibility) that 3D printed cameras afford us, they’ll never feel as solid as a precision metal camera body. But there are an awful lot of super cool printed cameras out there that are making large format and pano camera accessible to the masses. This is a fantastic thing.

After devising my plan and looking at a bunch of available options I found the WillTravel4x5 designed by Morton Kolve and it looked like it would be a perfect candidate. Not having a printer myself, I sent the links to my brother who printed several bodies and commented about how good the design was and how well it was printing. After receiving the body, I do what I normally do, which is partially assemble it, play with it, look at it for a couple days (or weeks...or even months) before figuring out how I want to proceed. 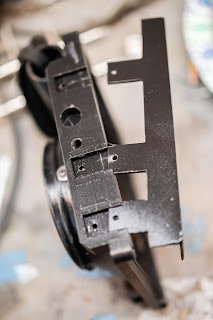 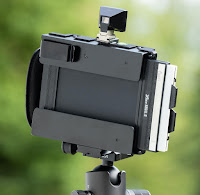 Having just figured out a ground-glass less metal spring back for my Polaroid 250 conversion, a similar back would be ideal on this camera.

I tend to shoot both quickly and hand held so being able to quickly load and reload with one hand adds so much functionality.

Mounting springs from Neilson frames to 1 1/2 angled aluminum you get the perfect amount of pressure on the film holder while its loaded in the camera. The aluminum was notched on the top to fit into the three accessory shoe slots on the top of the camera. They were bolted in place and finished with a dab of black caulk to keep it tight and vibration free over time. I added a spring clip from a holster to the top bracket which serves as a dark slide holder. This makes it easier to trip the shutter off of the lens if you aren’t juggling the dark slide too. 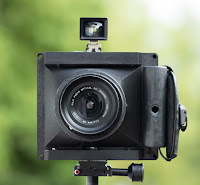 On an earlier camera I figured out that shrink tubing a piece of aluminum pipe makes a fantastic little lightweight handle that is quite ‘gripable’. The permanently mounted grip goes more on the front of the camera than on the side which helps keep the overall size down. Permanently mounted to the bottom of the camera is a 70mm Arca Swiss quick release plate mounted long side so the camera sits flat and with out putting pressure on the helical.

The biggest change to the design was the removal of the front of the printed helical thread and replacement with the metal flange that allowed the smaller metal helical to easily screw on and off.  With the help of lasers, levels and a Dremel, the front was evenly removed which left a perfect place to mount the threaded flange.
The camera is topped off with a finder from a 20mm Russian Russar lens and I’ve got a fantastic little sawed off ‘Chicago street sweeper’ as the movie gangsters would say. 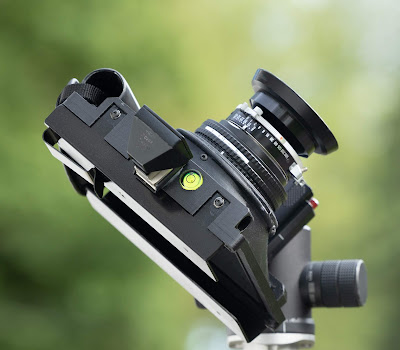 It so cool to be able to get two cameras out of one.

Thanks for reading!
Posted by Dirk Fletcher at 10:29 AM