The salad shooter, an 8x10 point and shoot 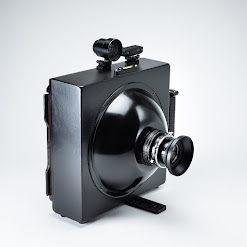 I’ve been building custom cameras for over twenty years and in that time I have been wanting to build an 8x10 camera but the parts and opportunity never presented itself. Recently, a friend reached out with a bunch of miscellaneous gear he was sorting through and asked if I would be interested in any of it.  Low and behold, part of the haul was an orphaned Deardorff 8x10 back and I just couldn’t say no.
While a custom built, one off 8x10 that is as sleek, classy and simplistic as the Globuscope 4x5 may be beyond my skills, I set out to create something equally as functional while looking better than using a dresser drawer.

Almost all of my recent cameras are designed to streamline the use of sheet film (or roll film for panocameras) with the understanding or idea that whatever film format I’m shooting, it will most likely be alongside and in addition to a modern digital system. 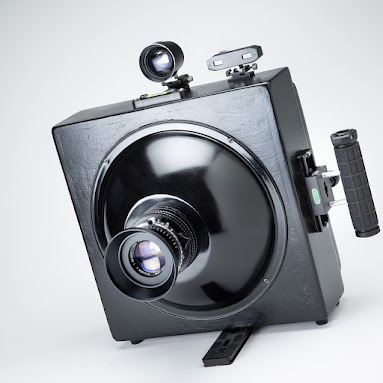 Several of my point and shoot style 4x5 cameras do not even have a permanently mounted ground-glass, just springs to hold the film holder in place. A removable ground-glass can slide in if needed but really keeps the camera smaller and more straightforward to operate. While it works out quite well for 4x5 but I can’t imagine being comfortable shooting too much 8x10 without a ground-glass for the majority of shooting. 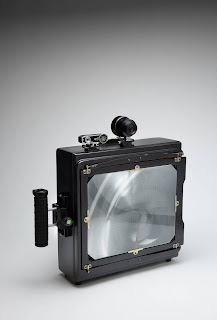 I tested several focal lengths before settling on a 210mm which gives a field of view similar to a 28mm lens on a full frame digital or 35mm film camera. In the beginning, I was looking at something longer, like a 250mm which is closer to a 35mm angle of view but went with the 210mm to keep the camera as small as possible and the extra width should help in DOF and ultimately help the user have a better overall experience.

Similar to my 120 pano cameras and 4x5 camera, I set out to make it handhold-able from the get go, but again, going back to both the size and expense, the reality is the camera will most likely find itself on sticks more than in someone’s hands. Like pretty much everything I use and build, the camera requires an Arca Swiss receiver clamp on your tripod to be used. I mounted two different arca plates on the camera, a larger PU-150 plate that is just short of six inches long and is mounted perpendicularly the camera. This helps give some protection to the focusing helical when storing the camera.

A second arca plate, a four inch PU-100, is mounted on the side of the camera for vertical shots. The side mounted Arca Swiss plate doubles as the handgrip mount. Both plate locations are on the balance point of the camera which explains why the bottom one is a bit off center as it is making up for the weight of the handgrip and rangefinder. By ensuring the plates are smack dab at the balance point, the camera does not require an over-sized tripod and head to lock it in position even for long exposures. 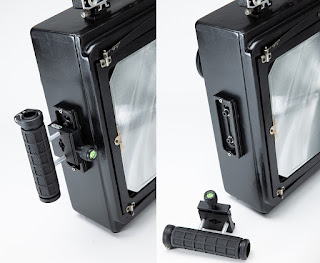 The hand grip is a grip borrowed from the motion picture industry, a comfy and solid
RedRockMicro to be exact. It has been spaced out about an inch from the Arca Swiss Clamp allowing for a perfect grip of the camera. Loosening the Arca Swiss clamp that’s mounted on the grip allows you to slide the entire assembly off the camera exposing the side mounted Arca Swiss plate for vertical orientation on a tripod.

Both the vertical and horizontal Arca Plates are reinforced on the inside of the body with large aluminum plates to disperse the stress on the cameras’ wooden frame. Before mounting the back on the camera the inside was flocked with several coats of truck bed liner to keep any internal reflections down.

After an embarrassing amount of time searching the Internet, I settled on a 58mm finder from the Koni Omega Rapid system. Using a Voightlander finder would be too small for this particular camera. It would make an already large body look even bigger. The Koni Omega finder both matches the angle of view quite well and it looks quite comfortable atop the camera.

The finder gives a clean and large unobstructed image and if you tip your head down just a tad the torpedo level is visible. This finder really worked out well for this build. 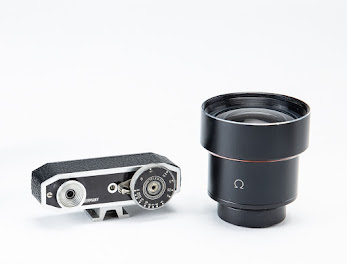 To the left of finder is a removable Telex rangefinder (that has been cleaned internally, repainted and re-leathered). You transfer the distance measurement from the rangefinder to the indexed measurements on the helical.

The lens dome and helical are permanently mounted, someone asked if interchangeable lenses would be possible, and while I agree it would be cool as I mentioned above, my goal with this particular camera was to make shooting 8x10 a bit easier and less cumbersome than it usually is. Perhaps encourage someone new to the format to give it a whirl.  Whether you are a seasoned large format shooter or a first time shooter, I’m hoping this camera might find an eager user who will enjoy its simplicity.

This camera is joined by my other custom cameras on my Flickr page here. 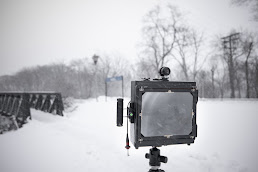 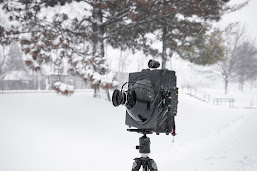 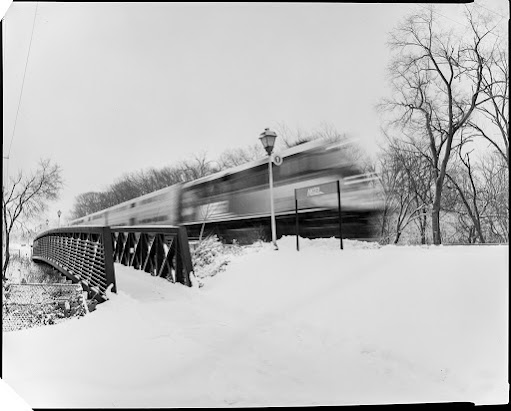