As long as I’ve been building cameras and lurking around camera builder groups and boards, it was only in the last year or so that I realized that Bronica lenses could be easily converted for use in custom cameras. Being a regular follower of fellow camera builder Oscar Oweson and his growing fleet of super cool printed cameras, his lens choice didn’t really click until recently. 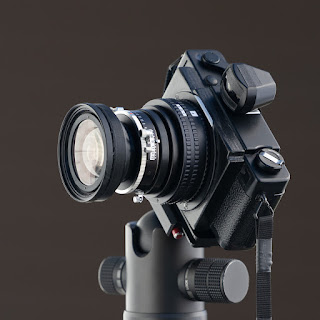 Bronica 6x6 SQ and 645 ETR lenses are constructed with a front and rear optics group that screw into an electronic Copal 0 shutter just like a large format lens. You can find a lens with a faulty shutter, spend a half hour or so on your workbench and strip the lens down retrieving the self contained lens groups and screw them into a mechanical Copal shutter and you are off to the races. This gives you several very worthy options including two different 40mm f/4, one for 6x6 and a smaller more affordable 645 version, a 50mm f/2.8 and if you need a bit more coverage an f/3.5 version for 6x6 and many other options.


Wanting to give this an try, my Holgawide knew its days were numbered. It was the second Holgawide that I made (hacked) from a Nimslo from the 80s. It was a 35mm camera that shot 4 frames simultaneously and yielded a 3D ‘lenticular’ print after sending the film to a special lab.

After Dremeling out the back of the Nimslo you get a film gate of 24mm x 74mm or just a shade shorter than three inches wide. Perfect for the 40mm f/ from the 645 system. What’s even better it has traditional film advance that only needs one throw to bring up the next frame. 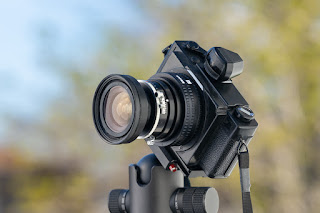 Scanning through boards and eBay I found a first generation 40mm f/4 from the 645 ETR system with a bad shutter that was $99.00 delivered, I was hoping to find one around $75.00 but thought this was close enough to give it a try. The front optics group came out without too much hassle, although it much more work then I was expecting. The rear group almost didn’t come out. I got to the point where I thought that I have nothing to loose so I ended up using a large pair of channel locks and after a bit of grunting and elbow grease was able to remove it from the shutter assembly.  Holding my breath, I grabbed a Seiko 0 shutter and low and behold, both optical groups screwed in just like a Super Angulon would!!

After making some measurements, I ended up using a 17mm helical that was mounted to the camera with a 1/4 piece of hobby ply in as a spacer. In order to keep the camera small, I did not add any additional shim material to spacer so you need to watch your focus as the helical will focus much past infinity. Just before the international COVID-19 lockdown I had just secured a local vender who could engrave the footage scale on the helical for me. Hopefully once this all clears up I will be able to have the scale properly engraved.

To finish off the camera, I added a 25mm Voigtlander finder which has been masked down to match the field of view of the camera. Almost everything I build uses Arca plates and this would be no different. I did have to drill the plate out so you can depress the film rewind button.

I do miss owning an XPan, it is a very cool camera with amazing optics but the reality is once the 5DmkIII and even the 6D came around I sold it off. I could not justify it as a photographic tool or even as a gorgeous piece of shelf art as I just wasn’t using it.

Even starting from scratch, you should be able to build one for less then 500 bucks if you have the wherewithal and some time at the workbench. Here are a couple shots from my very first test to see if the lens would cover and if I had calibrated the focus properly. There was a tiny light leak in these shots that has been corrected. I have much better test shots that need to be processed but Covid is slowing down my DD-X delivery! I’ll post more shots to Instagram once I can process and dupe them. 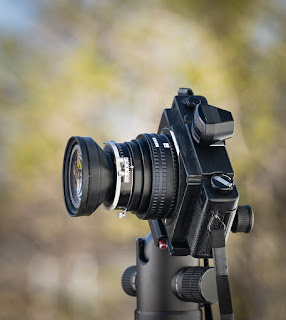 Alright, after adding it all up I gotta say I’m a tad surprised. Was hoping it would be around 300 for everything you needed. If you look at completed auctions on eBay they are going for much less than the $200-300 asking prices, if you are patient (we all have time right) these can be found for much less then the current asking prices.

You can certainly save some money by using a cheaper finder, there are some super cheap metal 20/21mm finders on eBay that look terrific on the outside but are heinous to look through, it’s almost as if they tried to make the optics painful to look through,  the bright side they will only set you back 50 bucks or so.

You can also build a simple frame finder but I really like the Voigtlander finders. For the money they can’t be beat, I’d put them up against a comparable Leica and Zeiss at least three times more the price.

Thanks for reading, stay safe everyone!
Posted by Dirk Fletcher at 7:44 PM