With the days getting shorter, and especially with the demise of daylight saving time a couple days ago, I started looking around the basement for a winter project.

For a fleeting moment, I thought about building a 4x10 camera, even found a couple holders at a great price on Glenn Evans website (http://www.glennview.com) which is an absolute playground for anyone wanting to build, shoot or have anything to do with unique and high-end large and medium format equipment.

So, I decided against such a large undertaking and opted for a project that would get me shooting quicker, my ADD was side taking over last night.

Something seems to happen to old Polaroid film that is a lot like rabbits, if you aren’t keeping a close eye on it, it multiplies…. don’t ask me how, but it does.  It never did it when it was in-date, expensive and actually useful, now that I think about it.  I have quite a collection of different kinds, even some Fuji stuff that had all been rendered useless by a histogram.

After diving into a drawer of prized possessions I surfaced with a classic Polaroid ‘Automatic 250’.  These are available on eBay for a few dollars; you usually pay more for shipping then the camera itself if you are patient and shop wisely.  After the wife and kids went to sleep I got to work with the dremel, drill press and pliers.  40 minutes later, nothing was left but a rather interesting looking 405 Polaroid back awaiting transformation into a one-off Holga-Roid style camera.

I’ve had students build HolgaRoids in this fashion, which works great, but I wanted to get a tad more image on the 3¼ by 4¼ inch Polaroid while still getting a strong vignette. A quick trip to eBay and twelve dollars later, not one, but two Ansco Ready Flash 620 cameras were in route.

Next post: Grafting the two into one and some images. 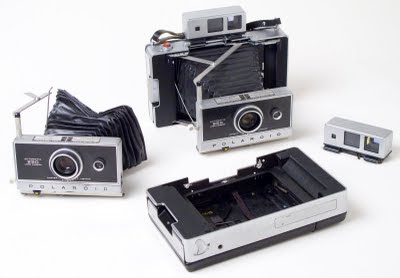 * here is the salvaged polaroid back and remnants of the camera alongside my personal Auto 250 that still gets use.

Posted by Dirk Fletcher at 8:17 PM