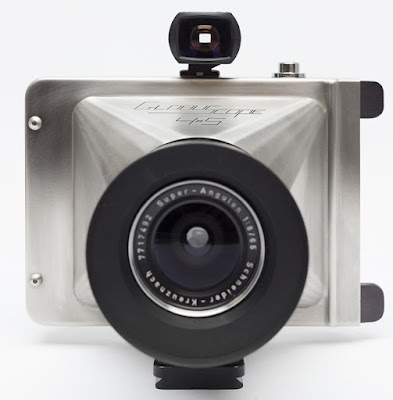 If you aren't familiar with the 4x5 GlobuScope or the three (remarkable) Globus brothers behind this and the ground breaking GlobuScope360 (which has enjoyed a resurgence in pop culture as a scanner of some sort Art Museum Scene in Ghostbusters II), Globus Studios is certainly worth looking into.

While I can't do them justice here, I will tell you this: they are absolute pioneers in the photographic world.
Any photo-geek worth their weight in D-76 should spend a little time reading about their contributions to the photographic world that range from developing several notable cameras to one of the brothers contributions to fixing the damaged Hubble Space Telescope.

Long being a fan of the 4x5 Globuscope as well as the look and feel of the 65mm f/8 Super Angulon, the Globuscope 4x5 has been the subject of many of my post conscious-family, nocturnal subterranean searches.  After a couple years of seeing camera bodies  come and go, internet lore will have us believe that 40 or so stainless camera bodies were discovered in the Globus studio in NY.  Regardless of the validity of claim, I was excited that a camera body might soon emerge in my price range.

After some back and forth with a seller with two camera bodies, we struck a deal for Globuscope 4x5 #74, just about smack dab in the middle of 150 cameras that were made.  Oddly enough, and for you mathematicians out there, I am aware of the peculiar claim of #74 being one of the 40 recently discovered out of 150 made. I would have thought #110-150 or #1-40 would show back up, but who knows... Moving forward, I promise not to have as much coffee as I've had while having my 'happy light' on high mode for well over the recommended hour of AM exposure....but I digress (again...)

How do you take a stamped stainless frame and make it into a fully functioning camera that is ready for the field?  This post is how #74 came back to life. Before starting, I gave myself a couple of ground-rules, I wanted to respect the initial design of the camera, to me, this meant no cutting and drilling. Everything should be reversible.

The first order of business was getting a lens mounted and focusing.  Searches of the web show lots of different of solutions here ranging from functional to downright absurd. Digging through my boxes of parts, I located the second generation Schneider helical that was inscribed for the 65mm.  Score! In addition it was a perfect fit for the stainless steel opening.  Some of the cameras that I've seen still have the first stage of the Globus focusing mechanism intact. Holding my breath, I got out a dark cloth and a tape measure and measured off 12 feet and it was tack sharp on the ground glass and infinity was infinity!  Perfect. I had the option of pulling a set screw from the helical or filing a very small slot into the camera which will keep the helical from spinning if it ever became loose. I did file the slot and added a very thin bead of gaffers tape so the helical wasn't mounting metal to metal.  The second version of the helical is lighter, focuses easier and is inscribed in both english and metric on opposite sides. Depending on which measuring system you would like to use was which way you oriented the mount.

I do wish I could have found a Linhof Technika select version of the lens as that is (in theory) the very best 65mm f/8 available, but the 65mm I found tested beautifully. From an earlier camera I built, I knew I wanted to finish the lens with the Nikon HK-6 metal shade which was made for the Nikon 20mm f/3.5. The diamater of the Super Angulon to is too small for the shade to mount securely so I cut the center out of a push-on lens cap to serve as a shim.  If you leave the bead from the Schneider lens cap on and reverse it as you slide it over the lens, the shade fits PERFECTLY with a nice little trim bead behind the shade.

Everything I build and shoot uses an Arca Plate for quick and secure tripod mounting and I wanted this to be the same. Looking high and low for a 60mm QR plate that also has a female 1/4 20 (incase you ended up somewhere without an Arca mount) yielded nothing.  The camera comes with a pedestal that drops down from the body which I wanted to anchor or connect to the back of the camera.  This would reduce any flex that might incur with the camera mounted to a tripod while sliding holders in and out.  Wanting a solid connection without drilling any holes, I used black adhesive caulk between the camera and the back of the tripod plate.  It will come right off if you every needed to pull it off.  In addition, you could pull it off in the field w/out any tools if need be.

I went back and forth between a black or chrome circular bubble level, I was leaning towards a black anodized level, but my family vetoed, and I went with a chrome level from Geier & Bluhm out of New York.  Great suppliers of levels of all kind for just about any camera project you can dream up. Again, I used white adhesive caulk to adhere it to the top plate. Lastly, short of a Zeiss finder, the very best finders (at any price) are made by Voigtlander.  A black Voigtlander 21mm optical finder was calked onto the existing accessory shoe.

That just about completes what I did to breath some light back into this beauty and here is the bitter sweet part: I placed the camera on several forums and eBay and went off to load some holders to take it out for a spin.  Before I knew it, the camera sold. And while I knew all along that I couldn't afford to keep it, I was surprised it sold so fast...until I saw who bought it and where it went. 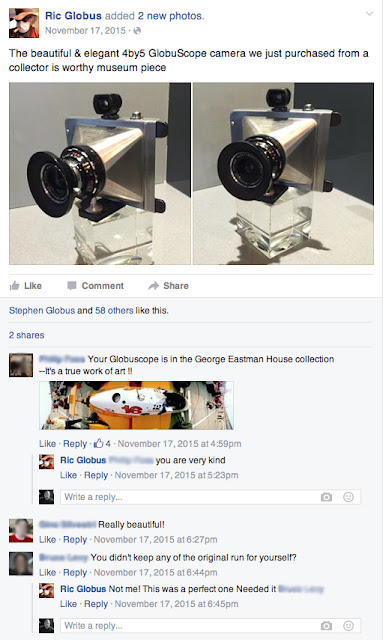 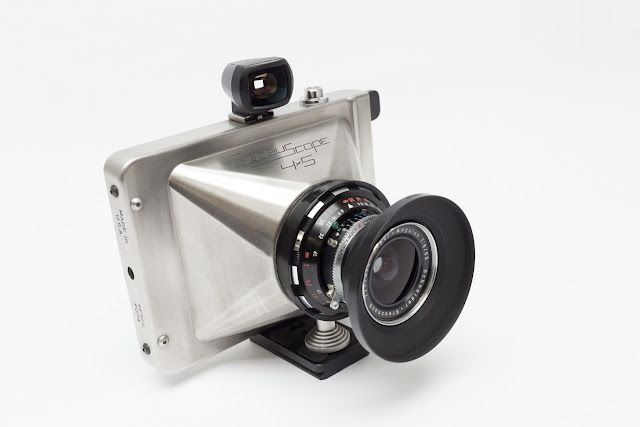 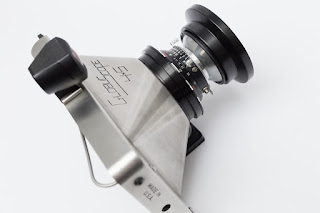 Posted by Dirk Fletcher at 9:31 PM