Maybe the recent announcement of Harrington being 'taught out' (which is a mildly fancy of saying closed) that is causing a sense of nostalgia, maybe it's a couple faculty and staff members who are also showing a renewed excitement and enthusiasm to again shoot film, I'm not sure what it is, but I've found myself in the basement rejuvenating some old one-off creations as well as designing and building cameras again.   I've been doing this for years but the ease of digital and demands of daily life has nearly made the desire to design and build cameras almost extinct.

Not sure what it was that rekindled the ember and honestly, I don't care, I'm glad it's back.

Which got me thinking.  My projects have always been driven mostly by the 'why' while the 'how' was generally dictated by the means at my disposal.  Whatever camera components and raw materials were at my disposal would be fashioned onto something new.  Here is my 6x17 'torpedo' camera and a 24mm x 4 1/2 camera that I shot with for years. 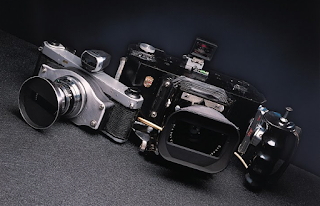 Both got the job done, and in most cases quite well but as I'm getting older I find myself wanting to carry less and do more.  I'm reminded of the line from movie 'The Graduate' predicting (rightfully so I should add) the strong future in Plastics.  Which also reminds of this guy:  Lance Criscuolo a tried and true Texan who I photographed at Chicago Ideas Week (a smaller version of The Ted Talks).  His company Zyvex Technologies develops (in his words) ‘Carbon fiber on steroids.’  Here is his talk about recruiting and maintaining talent in the midwest if you wanna check it out:
https://www.chicagoideas.com/videos/91 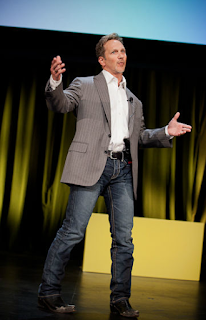 After his talk, I tracked him down and handed him my 5DmkII loaded with two batteries in the grip and the 70-200 f/2.8 mkII.  I dearly love shooting with that combo, sharp as a tack and the ability to practically see in the dark, I often joke it's my ‘rainmaker’, the downside is it's heavy as hell!  Carrying it all day certainly sends you to the medicine cabinet for an Advil or two and a glass of Pino.  I asked him how long until composites can provide the same level of precision and durability, stability through rugged temperatures and weather conditions.  He scratched is chin a bit and said ‘hmmm’ in an encouraging fashion...Canon, our old bones are waiting!

Almost 20 years ago I built this 4x5 super wide and got a remarkable amount of use out of it, both for personal work and a ton when I was the photographer at The Museum of Science and Industry.

Digital came in and I jumped in head first without even thinking twice.  I love shooting digitally, it's current iteration is fantastic. I can truly make images that weren't possible ten years ago.  The sharpness digital is capable is staggering.  But as I said at the beginning, I'm longing for something else, something comfortable maybe, or possibly something different then everything that I've been inundated with.  I started dusting off some of the film cameras that I still have and began regretting the ones that I've sold off over the years.  Particularly I've been missing my 4x5 super wide.  So I sat down to design something more functional then my last one I came up with this.  Smaller with a rotating back (same huge finder) it achieved every goal I set out to solve but I forgot to consult my back.  Machined from solid hardwoods on a backbone of Cambo components it's quite solid, which we all know is a fancy way of saying heavy. 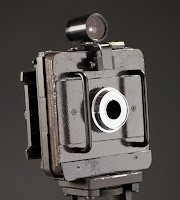 I missed (by a long shot) my goal of having a compact 4x5 Superwide that can be stuffed in a bag with some film holders and carried alongside a 'digital job'.  I really likes the size of the camera, but with its weight I'm afraid it would never make it out the car.  Sooooo off to eBay it went.

Enter the Travelwide by Wanderlust Camera, made right here in Chicago.  A brilliant idea for a lightweight ABS camera that accommodates either a helical mounted 90mm Angulon or a fixed focus 65mm Super Angulon. Sounds perfect and as they are still hammering out details and refining production runs and aren’t shipping cameras (or returning emails) yet. 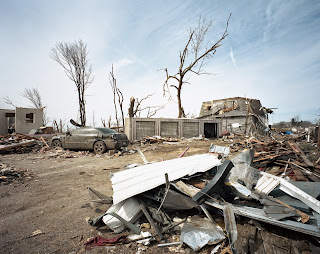 Being impatient, I started making measurements of my Harmon Titan 4x5 Pinhole that was sitting on my desk and low and behold (that phrase is straight from my 74 year old mom btw) once you remove the pinhole and plane front flat the flange to focal plane distance is just about  the perfect distance needed for focus free, point and shoot operation.

Here are a couple shots from its maiden run at the recently tornado stricken town of Fairdale Illinois.

I’ll follow up with a more detailed how-to if you would like to build your own super wide. In the mean time I'll see you shooting! 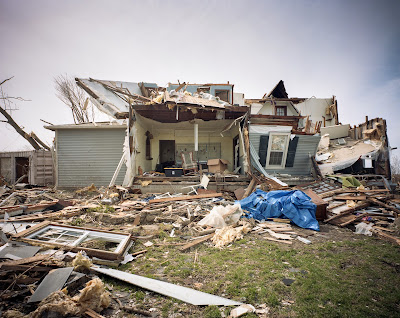 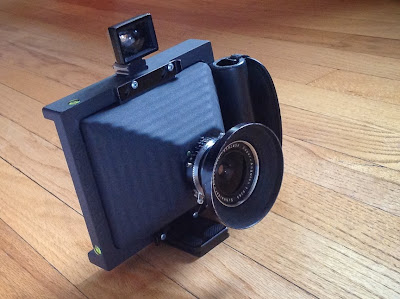 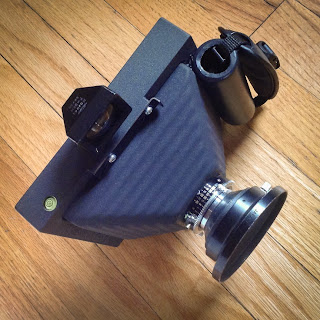 Posted by Dirk Fletcher at 5:30 PM