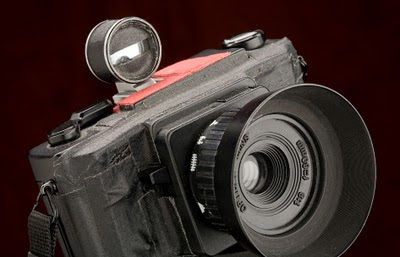 When the Holga first showed up in the art and photo world, I was as enamored as anyone with its low-tech brilliance and high art results.  Never being able to leave good enough alone I quickly did a variety of the mods that are commonly discussed on enthusiast sites and blogs as well as adding a couple of my own.  My favorite homebrew was gluing an orange gel on the 'aperture' arm so I could dial in darker sky's on a clear blue day when shooting black and white film.  My Holga film of choice is Ilford XP2+ for its ability to shoot completely and utterly without thinking whatsoever, ease of processing and fantastic scanability.   For some reason, when I load color in the camera, I still find myself thinking too much about light instead of just shooting without thought.  XP2+ completely cures me of that.
The next phase of my Holga exploration comes in pieces, many of them.  I started slicing and dicing the cameras up and to date have build a Holgablad, two Holgawides and most recently a Holgaroid, which shoots instant pack film. 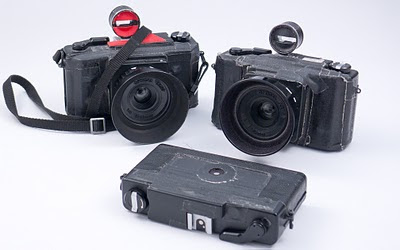 The first creation I want to share was featured in the 2003 Book, Adventures With Pinhole and Homemade Cameras: From Tin Cans to Precision Engineering.  If you are old enough to remember the 3D cameras of yesteryear there were two different manufactures, one was a Nishika, which was widely pimped by Vincent Price, full systems can still be found on eBay complete with VHS tape where the man of horror himself walks you through how to use your strange new camera.  As cool as this is for horror film and Michael Jackson enthusiasts alike, you don't want to use this variation of 3D technology.

The preferred camera is the Nimslo, it's smaller, but more importantly the body and guts are made of metal...almost completely metal.  This makes dissection and prep more tedious but it also gives you an easier more solid mount for whatever it is you are going to be sticking to the front end once its ready.  In my case it's the fabulous Holga lens and shutter assembly, but I have seen some creative camera builders use the Nimslo to build a hack XPan style camera using a 47mm or 65mm Angulon lens or even a 55mm Mamiya from a c220, c330 or C3 TLR. Before cutting out the rear of the camera you will need to take a phillips head jewelers screwdriver and start unscrewing everything you can find with a goal of removing the shutter and four-lens assembly.  The entire assembly will come out remarkably easy without reeking havoc on the film advance mechanism.

Once the lenses are out you are ready to cut away the metal back.  Now if you are not good with tools, especially ones that can leave you maimed, you may want to enlist the help of someone who is for the next part.  The biggest challenge you are faced with is removing the metal windows that make up the four frames on the film. This was needed because the pictures are not actually 3D by today's standards; they are akin to the lenticular images that were big in the 70's and 80's.  Remember finding a card in your cereal that was Bruce Wayne when viewed from one direction and Batman when viewed from other side? That is the same technology that both the Nishika and Nimslo were using to achieve their 3D results.
Using a Dremel with a cut off wheel, all the metal making up these four windows needs to be carefully removed.  The thing you need to watch for is nicking the plastic film advance wheel (pictured below).  It's one of the few plastic parts in the camera and it's real easy to nick with the spinning cut off wheel.  If you happen to even hit one of the sprockets your camera will not advance properly.  If you do accidentally cut off one of the sprockets you can do what is pictured above (on its back) and make it a panoramic pinhole camera, just remember to advance one and a half to two times per shot, I didn't want to have to advance one and a half or two times for the HolgaWide so I bought another and started cutting more carefully.

Depending on how clean and clear you want your camera frame to be will determine how clean and clear you cut out the film gate.  Being a basement Holga creation I was actually looking for a bit of a rough edge when I scanned the film, so the gate on the two cameras I've made is a bit rougher then it could be.  If you are going to build an XPan style camera, you are will probably want to make every attempt to make the your cuts around the film gate as perfect as possible.  For the Holgawide, I knew the limited coverage of the Holga would be giving the 3 1/2 inch wide frame its fuzzy and dark corners, so an uneven frame would add to its unique aesthetic.
What makes the Nimslo a near perfect Holga modification camera is the distance from the film plane to the where the precision Holga shutter and lens assembly will mount is just about as perfect as you can get.  All of the 'focus zones' will line up with crazy accurate precision: 'mountain range', 'family reunion', 'mommy/daddy/sibling' mode as well as 'best friend, focus will remain perfectly intact.

Mounting the lens assembly is remarkably easier then one would think. You first need to cut the front of the camera off leaving only the front piece of plastic that the lens and shutter of the Holga mounts to.  Its probably a good idea to remove the lens/shutter assembly before cutting the camera up. You will find two small screws holding it in when you look through the back of the camera.  When you pull it off the shutter release will be loose so be careful not to loose it.  You will also find two wires connecting to the hot shoe.  Cut as close to the hot shoe as you can so you can attach them to the hot shoe of the Nimslo to use a flash or Pocket Wizards.

Once you the remove front of the lens and shutter you will make a flange out of what was the front part of the Holga. This will mount to the front of the Nimslo when you are done.  Using the Dremel this comes off quite fast, a hacksaw takes a bit longer but works just as well.  Because this becomes the mounting flange for the lens assembly you may want to leave a little more than you think and cut/sand/trim back once you measure the back focus to insure it will focus properly.  To measure, you can stick a thin ruler through the back of the camera to make sure the distance from shutter to film plane is the same 1.75 inches as it is on an unmodified Holga.  Holding the flange to the face of your Nimslo,  push the ruler from the back through to see how close the focus is.  If you have an unmodified Holga around you can even just use a pencil to compare the distances between the two cameras.
Once you have the lens assembly in position you can attempt to line up the two screw holes on the body with two holes you will drill in your flange.  This will hold the lens in position.  I say attempt as I've made two of these now and it seems like I can't get within a mile lining up the two.  Don't sweat it as you are going to have to tape it up like crazy to get it light tight anyway.
You are almost done at this point, tape up every possible hole you can find, the bottom of the camera proves to be a bit problematic as once you remove all the guts of the Nimslo the light stopping baffles come out too.  Your first test roll may have some bad lights leaks that you will need to track down.  I usually sit in a dark room with a flashlight pointing from the outside into the camera and vise-versa until I've made the film chamber light tight.

Finishing touches include a lens shade, my first version used a permanently mounted lens shade from my local camera stores junk bin (Lagrange Camera in this case) but for my HolgaWide 2.0, I pressed and then super-glued a filter ring from a 52mm UV filter with the glass broken out so I could use filters and a screw on metal Nikon lens shade.
Both are topped with inexpensive Petri 'Tele-Wide' finders that have been masked down to the approximate angle of view for the camera.  On my second version, I taped a red 'heads up' style marker that allows the camera to be used without a finder.  This makes it smaller if you are packing a weekend bag or want to shoot a little more discreetly.  You basically hold the camera up to your eye as if there were a finder and where the red line stops you draw a mental line up to approximate the width of the frame.  It actually works pretty well.
If you have any questions while building one of your own drop me a line.

Happy building!
Posted by Dirk Fletcher at 12:29 AM