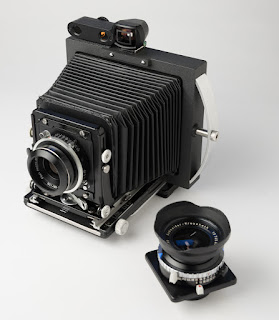 I had been struggling with this camera for a little bit, but it recently turned a corner and I really like how it came together. It looks great and it's function should be quick and precise which checks off all my initial objectives.  To complement the 65mm superwide point-and-shoot,  I have been wanting a similar lightweight camera in the normal lens realm with some movements but still compact and quick enough to conveniently expose a sheet here and there while shooting digitally.

Several earlier iterations (i.e. fails) were smaller folding cameras but lacked the ability for quick and accurate scale focusing. A couple attempts were cool though, my favorite was a Hasselblad bellows lens shade mounted backwards to the composite rear standard of the Ilford Titan pinhole camera.  While it was super lightweight and small, even the lightweight 125mm was wobbly.

My next attempt was a lightweight 4x5 shooter very similar to James Godman's genius 'binder clip' method of converting a Polaroid 110a for 4x5 use. You end up with a nice lightweight folding solution with a coupled rangefinder. I'm not a huge fan of the Rodenstock 127mm.  It is compact and reasonably sharp but my bigger concern was having to forgo movements. Ultimately the images would not be much different than just shooting with a full frame Canon with the compact 40mm f/2.8 Canon.

So I was back to a more traditional field camera only not folding. This is the second camera I've built using the brilliant composite rear standard made by master camera builder Mike Walker of the United Kingdom based Walker Cameras. I coupled it to the front standard of a 2x3 Graflex which I've also used several times with great success. The movements are very positive and quite solid and with the metal construction and compact size, very rigid. I'd be loosing the ability to fold the camera, but ultimately it seemed like the best option. 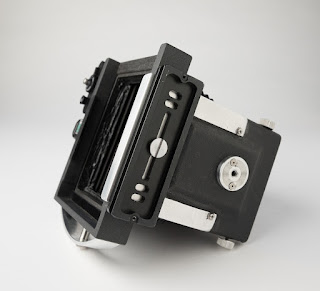 I cut down some large rectangle aluminum tubing into a fork like platform to cradle the Crown Graphic bed and cup around the back the Titan rear standard.  The aluminum came from a local scrap yard but if you don't have one in your area you can easily find this and other useful cuts of aluminum on eBay. It did take a several days of cutting and grinding to fashion it into the final piece so pace yourself, but it will be worth it.

In my early days of camera building, I used metal epoxy for everything, it set up quick, was sandable and held like a tank but once it set up, it's was there for good. That last couple of cameras I've worked on I've tried an opaque black adhesive silicone caulk that holds plenty tight without being permanent. A bit of this caulk and four well placed screws and the Century Graphic bed and Titan rear standard are one.

I'd really love to end up with something a tad more compact, I had a gorgeously mint model D Busch Pressman that was quite compact and full featured but heavy as a cinder block. The thought of slipping it and a couple film holders in my bag on a digital shoot NEVER entered my mind, that's how heavy it was.  I also feel like the extra space this camera will take up in a bag is decent a trade off for quicker operation in the field. This it totally worth it to me.

I was really stuck on the bellows, first using the 2x3 bellows joined to a larger set of 4x5 Graflex bellows with angled supports holding them to the camera.  This added a lot of unnecessary mass and weight to the camera.  Instead, I fashioned a spacer from small aluminum hobby tubing and sheet plastic to mount the larger 4x5 bellows directly to the back of the 2x3 front standard. Adhesive caulk was secure enough to mount the bellows inside the rear standard perfectly. 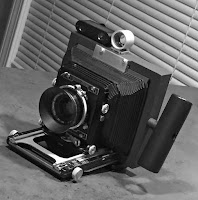 After shooting a light leak test the need for a handle or grip was painfully evident. My first attempt was a barbaric combination of aluminum tubing covered in shrink tube and mounted to the vertical tripod mount. While it was effective, it was both massive and quite ugly, taking up way too much room in a camera bag.  Falling asleep one night I had the idea to bend some aluminum over a round sub-straight to make an ergonomic and attractive handle. The flywheel of a bike trainer was the perfect size for the handle. A beefy 1/4 20 shoulder bolt attaches it to the camera very securely. 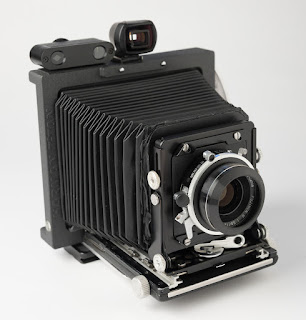 Adding a compact dome style lens shade, a modern Fotoman rangefinder (with the base removed and velcroed in place to reduce the cameras profile), the super bright 21mm Voigtlander finder and the camera is eagerly awaiting the arrival of some 4x5 CineStill 800T.  Chartpak graphic arts defines a frame line for the 125mm lens and inside the full 65mm (21mm) frame line.

All and all, I'm delighted with how it turned out. An added bonus was how perfectly the 65mm from my point and shoot couples with this camera. Both lenses, the camera and several film holders fit in a small Domke bag quite well.

If you have any questions about the build or want to do one yourself, feel free to shoot me an email. 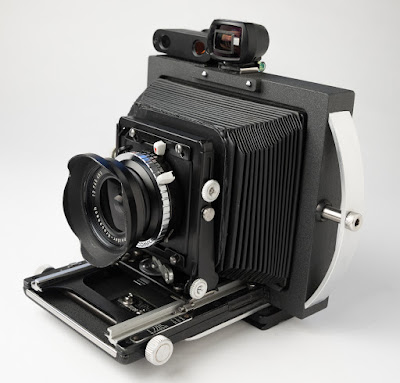 Thanks for looking!
Posted by Dirk Fletcher at 4:04 PM