The Anatomy of Inspiration...or how a giant yellow tube can inspire.

Anyone who knows me knows I've been building and shooting pinholes and custom cameras for quite some time.  You might also know that I have been involved with the people at Lenox Laser since winning the grand prize in their first ever pinhole competition in 2001 with a recovered type 55 shot of the Great Hall in Chicago Union Station.  That image was made with a homemade super wide-angle 4x5 camera with a Lenox pinhole.  Unfortunately that camera was dissembled and the parts used elsewhere when Polaroid Type 55 hit $100.00 a box! 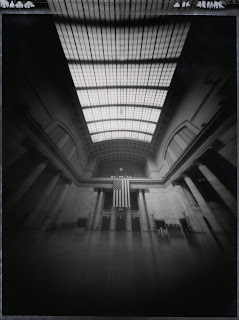 But none of that really matters because I want to share how the Lenox Hi-Contrast DSLR cap came to be.  Around this time last year my friend Greg Solyar called me to see if I wanted to come and be the Keynote speaker at the Industrial Institute of Optics first  annual Pinhole Seminar in 2012.  I was honored to be asked and started preparing my presentation as soon as I got off the phone.  My talk explored how alternative forms of photography have found their way into mainstream editorial and advertising photography.  It can be viewed by clicking here if you are interested; mom watched my entire talk (all five videos) and thought they were nifty!

In preparation of the seminar, owner Joe d’Entremont and optical engineer Greg Solyar sent me the latest version of the Lenox lens cap to play with which like all of their products, is beautifully built and at the core is fitted with the very best of pinholes available.  So I set out to create a set of samples to share with the audience.

Using a pinhole with a digital camera creates a uniquely different and look and feel than you would get shooting on a 4x5 and 8x10.  For a long time I've thought that 4x5 is the ideal format for pinhole photography largely due to its sharpness and natural fall-off on wider cameras creating a natural vignette you can almost touch and feel.  With manufactures producing less and less sheet film, professional labs waning and Fuji's pending 20% price increase hanging on is really only prolonging its demise.  Before you email a nasty-gram, I know there will always be a film shooting sec that may or may not outlive me, but the practically of shooting film is just no longer there at least for most of us.

So enter,  the completely ADD friendly lens cap pinhole.  The idea nothing new, I tried this on my first digital camera but quickly returned the parts to wherever I absconded them from once I saw the painful results.  The image overflowed with digital noise because of the early digitals cameras poor (or I like the word anemic here) ability to handle long exposures.  Coupled with its small APS sized sensor, you were left with a blurry nondescript image that did not look or feel unique in any particular way.

This changed as todays cameras have amazing high ISO abilities and full frame sensors.  In fact the most current of Canons offerings looks too good with their superior noise suppression at high ISOs and longer exposures.  In fact, the low light ability and grain structure of the older 5d MKII complement the look of the pinhole perfectly making it my ideal choice for digital pinhole photography.

So how did the cap improve and what's this talk about the yellow pipe of inspiration?  Below is the picture that changed everything.  I was out shooting with the Lenox cap while the kids were across the way playing Gaga Ball.  I photographed various stuff in the park including the newly installed yellow piping protection layer on the outfield wall.  On a bright sunny day, I thought it should be nice and bright, a perfect subject for some dramatic images.

It wasn’t until I printed some of the shots that I really noticed the dramatic increase in sharpness, as the pipe got right up to the camera.  Hmmmm, that's particular, it's as if I had the lens board too far away from the film plane or had focused right to the front of the camera.

A simple solution would be to bring the lens closer to the film, play with a lens on your camera and you will see what I’m talking about.  Easy with a normal lens but a bit more challenging with a pinhole cap. 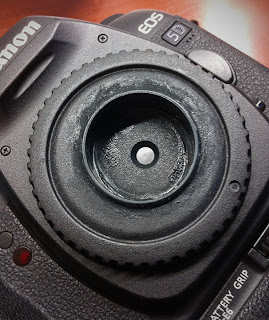 So after a glass of wine and a bit of drill pressing and super gluing, I had a completely functioning prototype that looked like the one to the right.

Here is how the much more polished (and now available) high-end Lenox version looks. 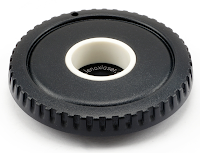 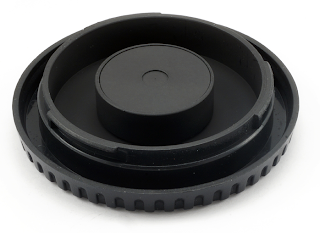 Looking at the calendar you can still have one delivered before Worldwide Pinhole Photography Day on the 28th of April.

Participate with a high-end Lenox cap or a Quaker oatmeal box like the one my dad built with me so many years ago but get out and enjoy some timeless lo-fi photography. When you complete your masterpiece share your work on the WWPD website here.

Posted by Dirk Fletcher at 8:55 PM