If you’re going to make an omelet…. 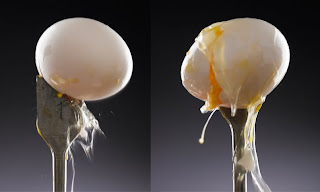 The final class shoot in my fall Modern Alternative Practices class is to explore high-speed flash photography using a quartz delay timer system.  After a couple ideas were discussed, we set out to break an egg over a one-inch paddle drill bit.  We thought the juxtaposition of the two would make for an interesting and unique image.

Now, when buying eggs in an urban convenience market, who knew to make sure they weren’t frozen.  Most of the dozen were frozen and the ones that weren’t currently frozen were at one time.  Even after we thawed them out (don’t ask how we did it) the insides were a yicky semi-Jell-O like consistency that didn’t splash well when broken by the bit.

On some of the drops the drill bit pierced the egg and nothing came out, it just bounced into the catch tray.

So off to a different store and two-dozen small AA eggs later were in a little better shape.  Ideally, a large or extra large egg would have provided a more dramatic break and ultimately more dramatic ‘industrial meets domestic’ image, but alas, we learned a lot and made an even bigger mess. 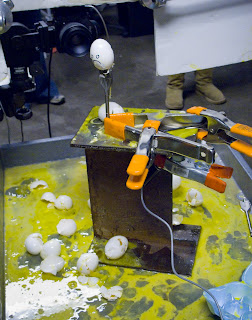 The second shot we tried was to capture a soap bubble that was filled with smoke as it popped.  This image was the idea of student Martina Josimovska (www.tinamarphoto.com) and was pretty straightforward to set up.

Smoke was blown through a toilet paper tube after being dipped in a small dish of soapy water.  Once the bubble was airborne it was popped and photographed.

We didn’t use a timer for this image, just relied on the lighting fast reflexes of Beking Joassaint (www.bekingjoassaint.com) and shot a number of takes until we got some images we liked. These were shot with strobe with a D3x Nikon.  For the egg image, we used a shock sensor attached to the base of the drill bit which when tripped, began the timer which in turn fired the Profoto strobes. A Phase One P25+ back captured the egg image. 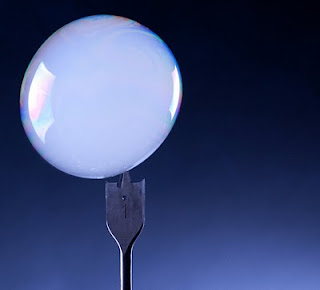 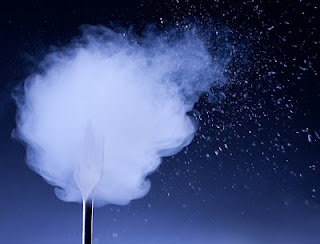 Posted by Dirk Fletcher at 9:44 PM